In the recent years Nintendo has opted out of E3 all together. As an alternative they have done live streams called Nintendo Directs, and in this case Nintendo Treehouse. After the debut of the new Legend Of Zelda, Masuda of Gamefreak took the stage to show more Pokemon Sun and Pokemon Moon footage and gameplay.

The trailer shown was nearly identical to previous ones, with the exception of all 3 starters battling their weaker counterparts. The hosts Sam and Terry began to discuss the game with Masuda and the game’s director, and after a few vague details divulged they then went into extensive gameplay of  Sun and Moon while it’s still in late development. First thing I noticed is that the new game is ditching the bird’s eye view and becoming more and more like the third person games on the Gamecube. The grid based movement also has been abandoned in favor of full 3d movement.

3 new Pokemon were revealed in this Nintendo Treehouse stream. During the game play segment, terry encountered Yungoos: a normal type with the abilities Stakeout or Strong Jaw and Pikipek who is normal/flying and can have either the Keen Eye or Skill Link abilities. Terry managed to capture both.  After the Pokemon segment ended, another trailer was revealed outside of the Treehouse stream that showed another new Pokemon called Grubbin. It is a bug type with the ability Swarm. 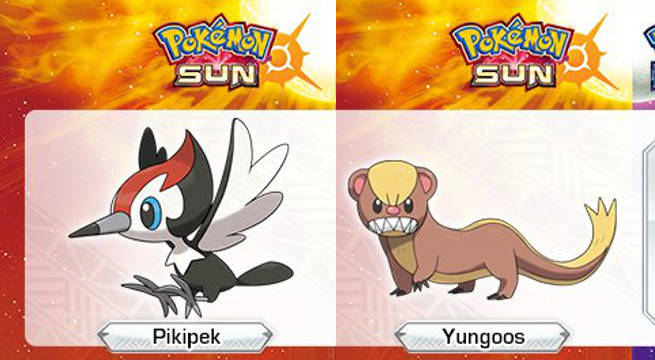 The battle system has remained the same to its core with a few changes to the battle display. The biggest reveal in this regard is that you can view all the stat changes either Pokemon has by clicking the monster’s icon in the center. For newcomers this may not seem like a big deal but to us veteren players every exact detail counts. After you battle a Pokemon for the first time, your next encounter will have additional insight as to what moves will be more effective.

After the gameplay concluded, they showed one more trailer showing off the new Battle Royale multiplayer mode. This is the first four-player free for all battle mode we have seen in Pokemon. How it works is that each player has 3 Pokemon and each uses 1 at a time. Once the first player loses all his or her Pokemon the match ends and the winner is determined by who knocked out the most/who has the most remaining.

Pokemon Sun and Pokemon Moon is set to release in North America for the 3DS on November 18th 2016. Stay tuned for more Pokemon and Nintendo news.

MY HERO ONE’S JUSTICE 2 Gets New Characters And Costumes

SUNSETRIDERS Is Now A Part Of The Arcade Archives

We use cookies to ensure that we give you the best experience on our website. If you continue to use this site we will assume that you are happy with it.Accept